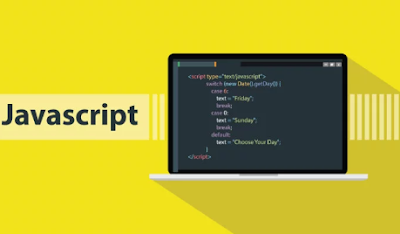 What is the meaning of branching in javascript and why is called branching?
For those of you who have never had a class at the time in school, college or learn about algorithms and flowcharts, perhaps for the first term you hear.
This branching actual term to describe the process flow of a program branching.
In the flow charts, logic “IF … THEN” described in the form of branches. 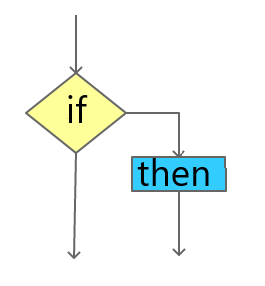 Because of that, this is called branching.
In addition to branching, these structures are also referred to: control flow , decision , structural condition, structure if, etc.
Branching will make the program be able to think and decisive action in accordance with the logic / conditions that we provide.
In the Javascript programming, there are a number of branching shape we need to know.
Discussion following …

The first branching: IF

Branching if a ramification which has only one block selection when the condition is true.
Try to note the following flowchart: 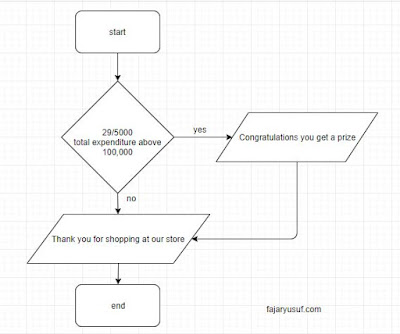 The flowchart can be read like this:
“If the total expenditure is greater than $100,000, then display a message Congratulations you get a prize”
If less than $100,000 how?
Yes messages are not displayed.
Let’s try to program Javascript, you can try it here :
The result:
Note this section:
This is called a block.
Block program in Javascript, begins with an opening brace { and end with a closing brace } .
Once inside there is only one row of blocks expression or statement, it can not be written with curly braces.
like this :

Congratulations you get a prize

The second branching: if / else

Branching if / else is a ramification that has two blocks of choice.
The first choice to correct the condition, and the second choice for the condition is false (else).
Try to note this flowchart: 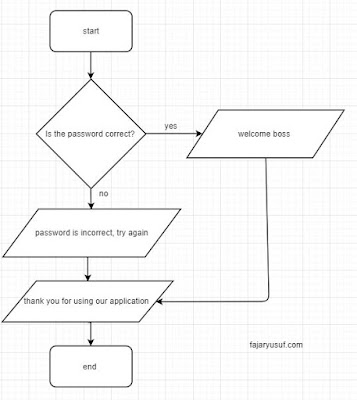 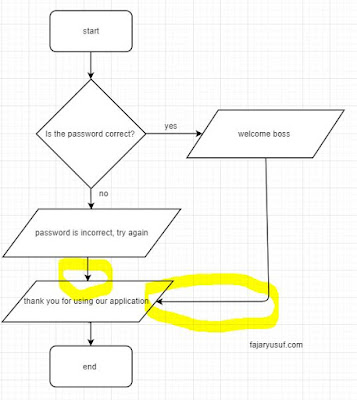 For more details, let’s try the following program:
The result:

The third branching: if / else / if

Branching if / else / if a branch that has more than two blocks of choice.
Try to note the following flowchart: 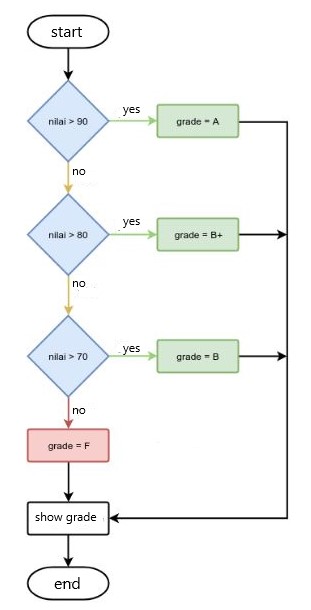 It is a block for branching if / else / if. We can add a lot of blocks in accordance with what we want.
Sample Program:
The result:
In the program above, we do not use curly braces to create a block of code to if / else / if.
because there is only one command line only. Namely: grade = (a grade)
When we use curly braces, then the above program will be:

Branching switch / case is another form of branching if / else / if.
The structure is like this:
We can create a block of code (case) as many times as desired in the switch block.
In , we can fill with values ​​that will be compared with the variable.
Each case must end with a break. Especially for default, does not need to end with a break because he was located at the end.
Giving a break intended to make the program stop checking other cases when a case is met.
Example:
The result:
Branching switch / case also can be made like this:
First of all, we give a true value on the switch, so that we can enter into the block switch.
Then in the switch block, we create the conditions by using a case.
The result will be the same as in the example of branching if / else / if.

We also can make in branching branching block. This is called branching nested or nested if.
Example:
The result:
Bonus: Using Logical Operators on Branching
Branching nesting, we can actually create more simply by using logical operators.
Example:
We can make this simpler with the logical AND operator (&&).

However, this is not the best solution.
Since we can not check whether the user is registered or not.
Spread the love