What definition of variables?

variable is the name that represents the value. Variables can be filled with a wide variety of grades with different types of data, such as strings (text), number (digit), objects, arrays, and others.
If compared with an object, then that variable as a container for storing things.

On this matter we will learn about variables and data types that are in Javascript.
We’ll start on the way to create a variable, how to print a variable to output, recharge, and remove it from memory.

How to Create Variables in Javascript

How to create a variable that is commonly used on javascript programming is to use the keyword var followed by a variable name and its value.
Example code:

In the coding example above, we create a variable named title with a value in the form of text string data type: “Learning Javascript on FajarYusuf.Com “.
Furthermore example code:

In the example above, we use letters to major variable names consisting of two syllables.
Underscore why we do not use it?
As we Javascript programming is more advisable to use camelCase in naming variables. 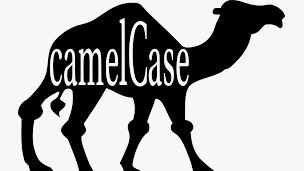 If we can not use camelCase? , Can only use a case or underscore snake like this example:

It will not be a problem or error coding, the program will remain valid and may be in the running. However, the majority of Javascript programmers prefer to use camelCase.
According to your taste, want to join the camelCase majority or snake_case minority.
It is necessary to note also, in addition to using the keyword var can also create a variable with the keyword let or without any keywords .
Example code:

// create a variable without any keyword
stock = 12

What is the difference between the three ways that using var, let and without the keyword?
The difference lies in the reach and use. Will be discussed more deeply.
Other questions might be:
“What happens if the value of the variable is not filled?”
The answer, it would be worth undefined variables (undetermined).
Example :

Then the variable x will be worth undefined.

How to display the contents of variables Javascript

How to display the contents of variables, we can use existing functions for output like the following:
Let’s try it, create a file called learning-variabel.html, then fill with the code below, or you can also try the html editor fajaryusuf.com   HERE  :
The result:

The meaning of the plus symbol ( + ) in the above example is to combine, not to add up.

Variables are mutable, meaning that the value stored in it can be refilled or changed.
Example code :

How to Delete Variable

Then the variable title will be erased from memory.
Elimination of variables can only be performed on variables that are made without the prefix keyword. While the variables created with the keyword var and let will be deleted automatically.

What Is a Data Type

Javascript will automatically identify the type of data that we give to each variable by value.
In the above example, we would get the following:
For certain things from these data types we can also check with the keyword typeof .
Example code:

The results on the console: 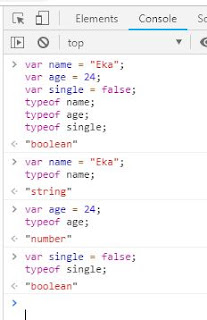 How we can identify the type of data on javascript in addition to using typeof?
We can recognize by way of writing.
Example code:

There are a few rules of writing variables in Javascript:
The first rule: Naming variables can not use the numbers in front of .
example code: