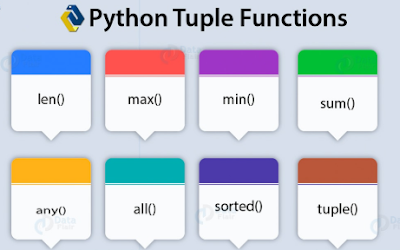 Tuple in the Python programming is a form of data structure that serves to store a set of data. Tuples are immutable , meaning that the contents of the value of the tuple can not be changed and deleted. But we can fill with a variety of values and objects.
In this material, the following things will be studied:

How to Make a Python tuple In Program

Tuple is usually made by parentheses like the following example:

in fact it could be without brackets are like this:

Both are valid for use.

If we want to create an empty tuple or no content of value, we can write the following example:

Then to make a tuple with only one (singleton), then we should be adding a comma in end code.
Example code:

# Example Make TupleSingleton
one = ( ‘contents’)
oneValue = “contents of the course”,

Why should it be added in a coma?
Because if you do not add a comma, will be treated as a string.

Just like material lists, tuples also has an index to Access the item or value in it. The tuples index sequence and the same list that is always starting from zero 0.
Example code:
So the result:

If we try to change the value, then the error will occur.
as the following example:

Error because tuples are immutable or unchangeable value.

How to Take a Long-tuple

To take the length or number of items in tuples, how can be done by using the function len ().
Example code:
Obtained results:

Tuple can also be nested, meaning that tuples can be filled with tuples (tuple Nested).
Example code:

tuple3 will contain the value of tuple1 and tuple2.

Tuple can also be filled with any object such as a list, dictionary, object, and others.
Example :

Tuple making process might be called packing, while to retrieve (extract) the entire contents is called unpacking.
Example:

# Prefix create such a tuple
web = 123,”FajarYusuf.Com“,”https://www.FajarYusuf.Com ”
# and in-unpacking
id_web, name, url = web
# then now three of these variables will be worth the
# appropriate in the tuple
#
# let us print
print (id_web)
print (name)
print (url)